What does liquid chromatography test for? 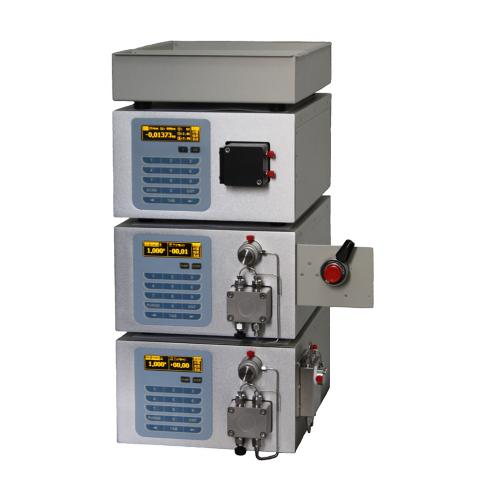 Reversed-phase HPLC or Ultra-high Performance Liquid Chromatography (UHPLC) is a commonly used separation mode. It provides dynamic retention of compounds possessing hydrophobic and organic functionality. A combination of hydrophobic and van der Waals type interactions between all the target compound and both the stationary and mobile phases enables the retention of these compounds by reversed phase.

How Does HPLC Work?

In column chromatography a solvent drips through a column filled with an adsorbent under gravity. HPLC is a highly improved form of column chromatography. A pump forces a solvent through a column under high pressures of up to 400 atmospheres. The column packing material or adsorbent or stationary phase is typically a granular material made of solid particles such as silica or polymers.

The pressure makes the technique much faster compared to column chromatography. This allows using much smaller particles for the column packing material. The smaller particles have a much greater surface area for interactions between the stationary phase and the molecules flowing past it. This results in a much better separation of the components of the mixture.

The pressurized liquid is typically a mixture of solvents such as water, acetonitrile and/or methanol and is referred to as the mobile phase.

The components of a mixture are separated from each other due to their different degrees of interaction with the absorbent particles. This causes different elution rates for the different components and leads to the separation of the components as they flow out the column. Compared to column chromatography, HPLC is highly automated and extremely sensitive.

Liquid chromatography can be used to detect the following

The main purpose of the HPLC technique is to identify, quantify and purify a particular analyte or compound. Both quantitative and qualitative analysis can be done. HPLCs can be used in the following applications:

Detection of impurities in pharmaceutical industries